I can’t believe I am a mom to a 2 week old already!

Time has flown by (except during those 3 am feedings:).

I apologize in advance for how long this post is. And thank you for all the kind words on social media about the baby’s nursery post last week.

Back in November when I found out I was pregnant, I had only two wishes in regards to the baby’s birth: have a daytime birth and a safe delivery. I decided early that I was not (and could not) be a control freak about the birth. I had already tried to be a control freak about becoming pregnant…and of course it didn’t go at all like I planned. It took us a lot longer to get pregnant that I ever expected which lead to all kinds of anxiety and self-induced stress that was again compounded as so many people were asking when we were going to have a baby.

Tuesday, July 5th my husband and I had a leisurely lunch, and then we headed to my regular weekly OB appointment; I was 37 weeks pregnant. My blood pressure had been high most of my pregnancy so when the nurse told me the number on the cuff I thought nothing of it. Ignorance truly is bliss.

After reviewing my history, my OB suggested I go straight to the hospital for testing. So we jumped in the car and headed over to the hospital, only a 5 minute drive.

After checking in, someone handed me a hospital gown and said “Get into bed.” My husband and I were slightly confused because I thought “tests” would involve some blood work and we would be good to go. They took my blood pressure again. It read 175/100. I had never been hospitalized before. So just the hospital stay alone completely freaked me out.

I really felt great for the first time in the whole 9 months I had been pregnant. The physical therapy I undergone recently had basically fixed all the debilitating hip and sciatica pain I had been dealing with for 7 months. So we really were in shock that it seemed as if I would be staying in the hospital for a while.

After some clarification from the OB on-call we learned I would be in the hospital for at least 24 hours, and that there was a 50% chance I would be induced in the next few days. The doctor in the OB office had failed to mention that I had initial signs of pre-eclampsia which is why I needed further tests.

We called and texted family and close friends to let them know what was going on. My sister graciously picked up my dog. Joe ran home to get clothes and toiletries for both of us.

After the 24 hour testing they determined I had both pregnancy-induced hypertension and pre-eclampsia. My doctor immediately scheduled me to be induced at 5am the following morning.

To prep me for induction, my nurse immediately administered Cervidil which was the most painful things I experienced in the whole process of being induced. I won’t lie. I cried. I could not help it. Ugh, it was rough. Although I am not sure if it was harder on me actually being pain or my husband watching me be in pain.:)

5am came quickly. I took a shower and got back in bed. By about 5:30 my nurse started the Pitocin. My doctor broke my water within about an hour because I was only 1 cm dilated. At first it was easy going, but after about two hours on Pitocin I was in such intense back labor I could barely breath. Joe stood next to me and watched the monitor. I would ask him when the contraction peaked because then I knew the pain would not get any worse, and somehow it made it easier to get through them. I was trying to be tough, but after about another half hour I told the nurse I had to have some pain mediation. I could barely catch my breath to even get the words out because I was not getting any breaks between the contractions. Pitocin is nuts! 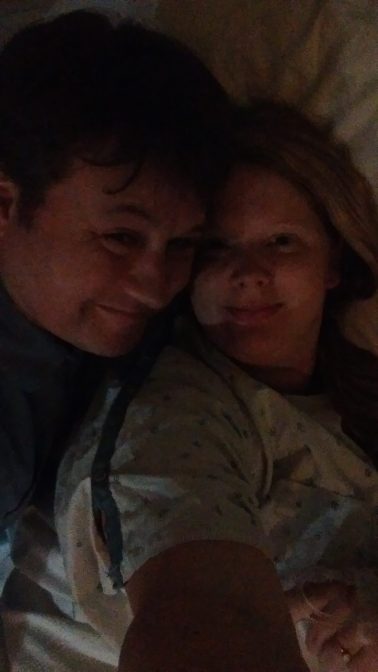 After about 15 minutes my nurse came back with medicine that basically put me in a labor coma. I don’t remember much of the next two hours or so. But thankfully I labored to 4 cm and was approved to get an epidural.

I can only imagine the scene I created as I was still in a slightly comatose state, trying to sit on the side of the bed, talk to my husband, and receive an epidural. I don’t remember anything that I said other than. “Wow that didn’t hurt at all.”

I climbed back in bed expecting to be relieved of all the labor pains. Unfortunately, that was not the case. My back labor intensified. And continued until I was fully dilated. I don’t blame the sweet guys who administrated the epidural. I truly think the severe pain from pinched nerves that I experienced during pregnancy had something to do with the pain medicine working in only certain parts of my body. In the meantime I learned my dad was in the waiting room. I gave permission for him to come into labor and delivery. He prayed with us for safety during the delivery.

By 3pm my nurse said I was ready to push. Mentally and physically exhausted I asked her, “How long does the pushing take?” She said well for 1st babies it can take 3 hours. I determined right then this pushing stuff was not going to take 3 hours. I could not take the back labor any longer. Unfortunately, Parker was face up, and he got stuck on my pelvic bone for a while. And I worked so hard at pushing I actually gagged from over-exertion.

After about an hour, my OB came in and said, “Let’s get this baby out.”

Three pushes later I felt the head, then the shoulders, and finally the hips being pushed out. The feeling was euphoric. I was so happy to be done! My husband cried, and I was still in shock that I had just birthed a baby out of my body. And that I had survived an induction with a slightly failed epidural. 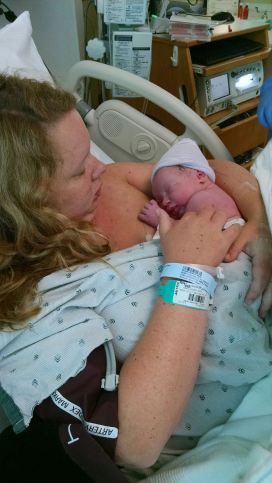 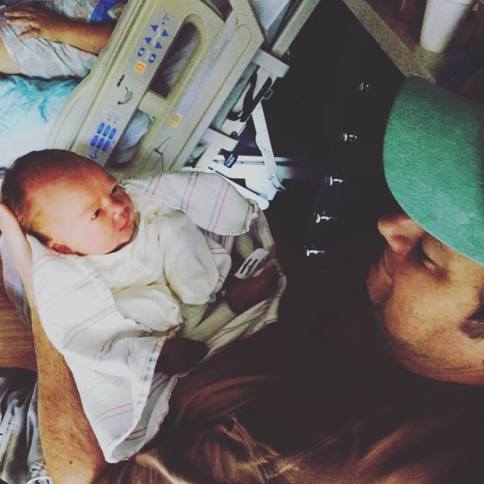 Shortly after they took Parker to be cleaned up, I heard a flop on the floor and the surgical tech said, “Whoops.” Ladies and gentleman, they dropped the placenta and all the other stuff that goes with it all over the floor of the labor and delivery room. Talk about gross :) Thankfully I didn’t see it, and they got it all cleaned up right before my parents came into see the new baby and pray with us again over our new arrival.

We asked for no other visitors for a few hours while we recovered from the long day. And secretly I just wanted to eat all the sushi I could get my hands on. Joe ran to our favorite sushi place and picked up a feast for us to eat in our hospital room. Then at 7:30 my stepsons, siblings, aunts, uncles, cousins, and great grandparents starting showing up to see the new baby.

I am so so thankful for my husband who literally did not leave my side all day during the induction. During our entire hospital stay my sisters/sister-in-law were such a great help bringing us meals and stuff from home . And I am indebted to all the great nurses (especially the night nurses) and lactation consultants assigned to me. They were so patient with all my questions and concerns.

Finally on July 9th, we were released from the hospital with our new baby. We were SO happy to be home in our own bed. Parker is a great eater and sleeper. And we are blessed with such a great support system with lots of willing and available arms to hold the baby. :)

While being induced was not my first choice for having a baby, my doctors told me I would not have been able to deliver vaginally if I had gone full term. The baby would have simply been too big. So I was grateful not to have a Cesarean.

Many nights since we have been home I have laid in bed(when I should have been sleeping) listening to my husband and baby breathing and cried in thankfulness for all the good gifts I have been given.